Rwenzori Mountains National Park is located in southwestern Uganda on the east side of the western (Albertine) African rift valley. It lies along Uganda’s border with the Democratic Republic of the Congo (DRC) and borders the DRC’s Virunga National Park. It is situated in the Bundibugyo, Kabarole, and Kasese districts, 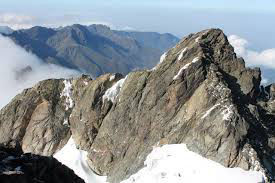 Rwenzori Mountains National Park was established in 1991. It was designated a UNESCO World Heritage Site in 1994 because of its outstanding natural beauty.

Almost 1,000 km2 (386 sq mi) in size, the park has Africa’s third highest mountain peak and many waterfalls, lakes, and glaciers. The park is known for its beautiful plant life.

The park comprises most of the centre and eastern half of the Rwenzori Mountains. The Rwenzori Mountain is the highest mountain range in the whole of Africa with Africa’s third highest mountain peak, 6 glacial peaks: Mount Speke, Mount Stanley, Mount Gessi, Mount Emin Pasha, Mount Luigi da Savoia as well as Mount Baker. The main peaks can be probably compared to those of Kilimanjaro and Mount Kenya. The park has glaciers, snowfields, waterfalls, and lakes and is one of Africa’s most beautiful mountain areas.

The national park hosts 70 mammals and 217 bird species including 19 Albertine Rift endemics, as well as some of the world’s rarest vegetation
The Rwenzoris – the fabled Mountains of the Moon – lie in western Uganda along the Uganda-Congo border. The equatorial snow peaks include the third highest point in Africa, while the lower slopes are blanketed in moorland, bamboo and rich, moist montane forest. Huge tree-heathers and colorful mosses are draped across the mountainside with giant lobelias and “everlasting flowers”, creating an enchanting, fairytale scene.
The Rwenzoris are a world-class hiking and mountaineering destination. A nine- to twelve-day trek will get skilled climbers to the summit of Margherita – the highest peak – though shorter, non-technical treks are possible to scale the surrounding peaks.